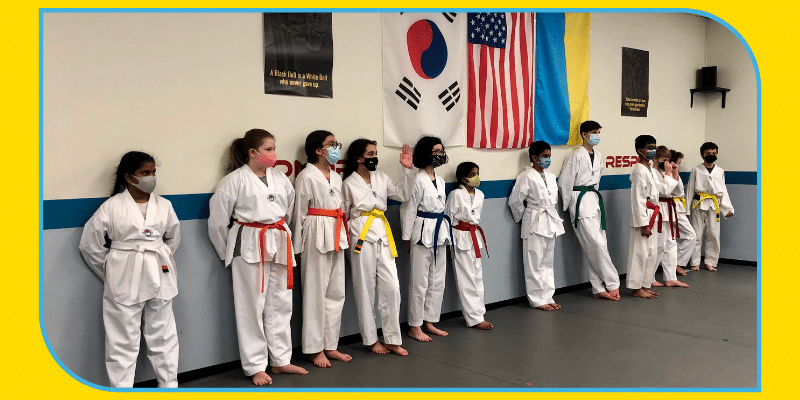 Taekwondo’s Belt System has been an important part of Taekwondo tradition since the 1940s. Students and practitioners are honored with belts and ranks for being disciplined, skilled, and dedicated to their art.

At Akula Taekwondo, we encourage students to learn and hone martial arts skills, develop mental focus and physical fitness, and enjoy the journey to black belt. Martial Arts training should not focus solely on achieving belt rank. But testing is an important ritual in martial arts. The length of time it takes to earn a black belt in Taekwondo depends on the age, dedication, and ability of the student, as well as the standards of the martial arts school issuing the black belt.

Belt requirements vary between Taekwondo, Karate, Jiu Jitsu, and other forms of martial arts. Standards also vary from school to school. In general, when the instructor deems a student ready to move on to the next belt, the student will be invited to test. Traditional Taekwondo schools (dojang) maintain high standards to avoid becoming belt factories. 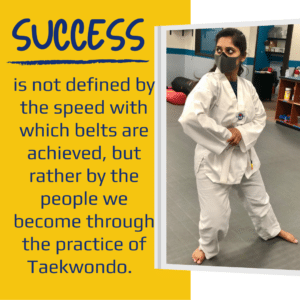 Belt colors are not standardized and thus, vary from school to school. Each belt color in Taekwondo correlates with the GUP (rank) of the student. The term GUP (sometimes spelled Geup) means degree. When moving from school to school, the GUP will let the new instructor know the level achieved.

At the Black Belt level, the term DAN (meaning phase and pronounced dahn) replaces GUP as rank indicator. There are ten DAN degrees, starting with the first and ending with the tenth. All DAN degrees are represented by a Black Belt. Embroidered stripes, generally in gold, indicate the black belt degree achieved.

To indicate intermediate steps towards the next rank, some schools (including Akula Taekwondo) add tape stripes at the end of the belt when students reach training milestones. The stripes track achievement of short-term goals. There is a stripe for each skill or trait to be learned for each belt rank.

As students move up in belt ranks, the requirements to earn a stripe become more demanding. The stripe means the student consistently demonstrates competence of the given material. It takes some students longer than others to earn stripes. Since Taekwondo is an individual sport, every student progresses at his or her own pace.

At Akula Taekwondo, stripes are earned and taped around the end of the belt when the following skills are mastered.

Forms (poomsae) are a series of attack and defense movements consisting blocks, strikes, and kicks. Students learn the pattern, stances and techniques for each form or Taeguek. Focus, posture, and power are important components of proper forms.

Green Stripe, One Steps — All Belts

One Steps are controlled scenarios that help Taekwondo students develop proper technique and knowledge to react in a real life situations that require self-defense moves. During One Steps, students practice a series of choreographed moves and counter-moves.

Sparring (called kyorugi by the World Taekwondo Federation ) is a controlled form of freestyle fighting within the confines of strict rules and precautions. In sparring, two or more combatants practice their techniques.

Taekwondo Martial Artists allow their belts to wear naturally. The belts of Taekwondo Masters are often frayed and stained from years of wear. The battle scars are worn proudly.

Testing for a martial arts belt is an honor and a privilege. It’s an opportunity for students to discover for themselves what they have learned and the extent of their abilities. Moving through the belt colors (belt ranks) is a wonderful part of a martial artist’s journey.